Just only stars, blinking always breathe in us...

I haven't really updated my journal in a long, long time since I made "the move". Anyway, I'm pretty excited for tonight's Shounen Club because Uchi--eh, that should be pretty obvious. I mean, Koyamama and Uchi together! That should be enough reason for a fangirl to flail, right? And if what I heard about Yamapi and Takki guesting together with him is true, I can probably melt into a puddle of goo. I wonder what kind of interaction I'm going to get. And the songs--I hope they'd be memorable enough. D:

Another thing I'm excited for is RESCUE--OMG, with all the plugging and pimping and promotion, I'm wishing with all my gut feeling that it'd be a blockbuster, butt-kicking drama with the two most adorable people (not to mention squish-worthy BFFs) known for their almost never-changing hairstyles, LOL.

Wouldn't you just like to squish them for being so BFF-y? Massu alone makes this drama all worth it, LOL. YES I AM BIASED NOW SHUT UP. (Credits to

newsholic for the scan)
Now what else, ah, yeah, that's right--TEGOSHI IN GLASSES SUCKS THE LIFE OUT OF ME. I mean, he looks so manly it's so wrong! D: Someone should give him a long wig and a dress and make him parade around set--that's the only way I'm going to look at him the way I did before. And don't get me started on the Maki-Tego twin thing... The man is a lot prettier, heh. (Credits to

newlife18 for the photos) 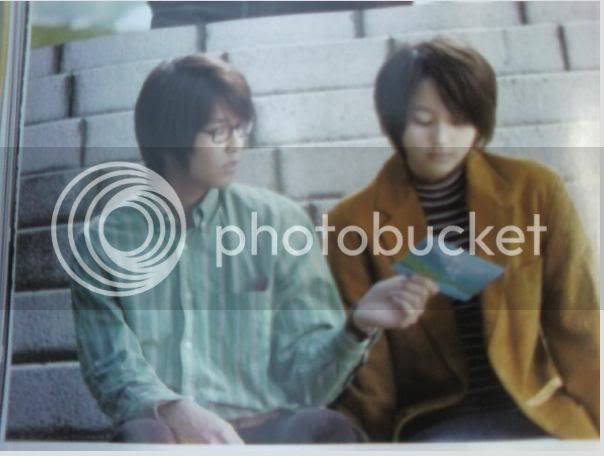 Speaking of Tegoshi, I was with my family at The Fort on the 30th last year, looking around at sports shops due to my dad's insistence--and saw this:

Which then my fangirl mind decided to use to remind me of:

It doesn't even look remotely the same but the reds and blues (and the identical UNICEF logo asdfghjkl) made me fangirl nonetheless and made me do this:

I should be ashamed of myself, really. =____=
And the last thing I'm going to fangirl about is... NEWS' new song, 「share」. This song is just made up of awesome, like total awesome. It was composed entirely by NEWS, both music and lyrics (music mostly attributed to Ryo and Shige, title suggested by Ryo), especially for the Tokyo Dome concerts. Each member wrote the part he sang and just asdfghjkl, the song made me almost cry hearing it the first time. The intro is just so moving, and the lyrics, although some of them are dedicated to the fans, most are about NEWS growing up together, facing hardships, crying and laughing together, and looking at the same star. Apparently, Koyashige were surprised and touched at seeing fanvideos fans have made (after googling the members), thus, inspiring the song.